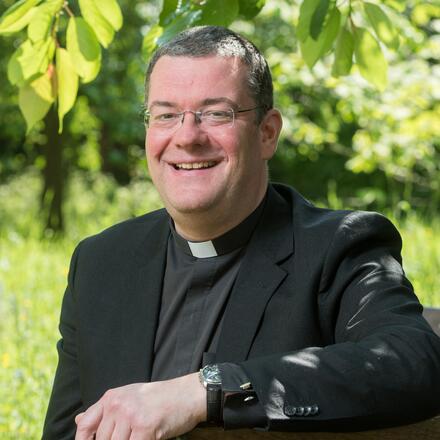 Simon is Chaplain and Fellow of Merton College, Oxford.  As well as being responsible for the day-to-day life of the Chapel, Simon also co-ordinates the various College welfare bodies and convenes the College's Student Support and Chapel & Patronage Committees.  He is a member of the Faculty of Theology and Religion at the University of Oxford.

Before coming to Merton, Simon served his curacy at Tewkesbury Abbey in the Diocese of Gloucester. He trained for ordination at Westcott House in Cambridge and, as a member of Selwyn College, completed a PhD in Syrian baptismal theology.

He is a member of the Church of England Liturgical Commission and the Oxford Diocesan Liturgical Committee. He is also a trustee of the charitable company Hymns Ancient and Modern. He was installed as an Honorary Canon of Christ Church in 2015 and as a Wiccamical Prebendary (Honorary Canon Theologian) of Chichester Cathedral in February 2016.

Simon writes and teaches in the area of liturgy. His publications include The Sacramental Life: Gregory Dix and his Writings (Canterbury Press, 2007) and Celebrating Christian Initiation (SPCK, 2016).