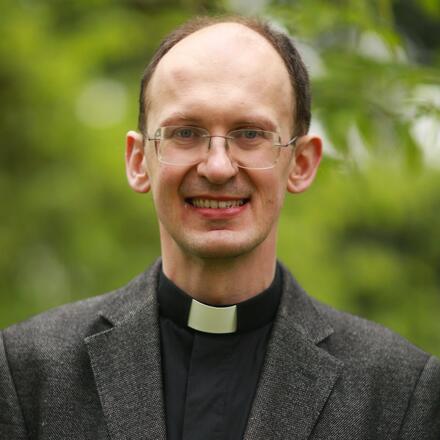 Michael is Lecturer in New Testament and teaches a variety of New Testament courses on both the Oxford University and Durham Common Award programmes. He is also Programme Lead for Independent Students. His research interests are Pauline studies and textual criticism (the study of Biblical manuscripts).

Michael grew up in London and went on to study Classics and later Theology at Oxford University, where he gained the Canon Hall Junior Prize for Greek and the Pusey and Ellerton Senior Prize for Hebrew. He then completed a PhD at Cambridge University in the earliest Greek manuscripts that contain the entire Bible. His research has been published in Journal of Biblical Textual Criticism and Studia Patristica. He has also published a Latin textbook and a critical edition of a work by a seventeenth-century, Catholic priest, Bartholomaeus Holzhauser. He has presented his research at venues including the Universities of Oxford, Cambridge, Munich and Innsbruck, and at the Princeton Scribal Habits Workshop, the Birmingham Textual Criticism Colloquium, the British New Testament Society and the Society of Biblical Literature. He was a visiting student at the University of Salzburg and a Research Fellow at the Ludwig-Boltzmann Institute for Neo-Latin Studies, Innsbruck.

Michael has always been active in church ministry alongside his academic research. He is currently Curate of St Mary’s Church, Wheatley. He has worked on church staff teams for four years and during his PhD, he ministered actively in his college chapel, including serving for two terms as Lay Acting Chaplain. He has served in student ministry, homeless projects, and youth and children's groups. His “secular” work experience includes secondary school teaching and teaching English as foreign language.

Michael loves to help people understand and love the New Testament, whatever stage they’re at on their journey. He is married to Katherine and enjoys coffee, cake and any book or film with spies in it.