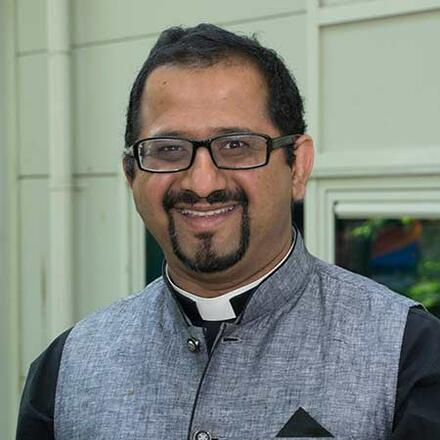 Shemil was born and brought up in Kerala, in a Christian family in the tradition of St Thomas. He first studied for a Bachelor's and Master's degree in English language and literature, before achieving both Bachelor's and Master's degrees in theology from the University of Gloucestershire. Shemil has wide experience of working with Anglican communion churches in Asia and Africa and has worked as a teacher in Sri Lanka. He was ordained in Peterborough Diocese in 2014 after training at Cuddesdon where he also gained an MTh. While at Cuddesdon he co-founded AMEN (Anglican Minority Ethnic Network), an independent network to encourage vocations from minority ethnic communities.

Shemil is the Anglican chaplain at Oxford Brookes University; he also serves as BAME vocations adviser, Diocesan Synod member, a member of National Minority Vocations Strategy Group, and represents the Diocese of Oxford on the Committee for Minority Ethnic Anglican Concerns. He is a trainer for Unconscious Bias training and teaches Contextual Theology for the CMS pioneer course.

Shemil's academic interests are in theologies of religions, and contextual theology. He is currently doing a PhD researching the Church of England and its relationship with ethnic minority communities. Shemil is dyslexic and happy to support students with learning difficulties. Shemil is married to Becky, who is also a Cuddesdon alumnae, and they have two children.