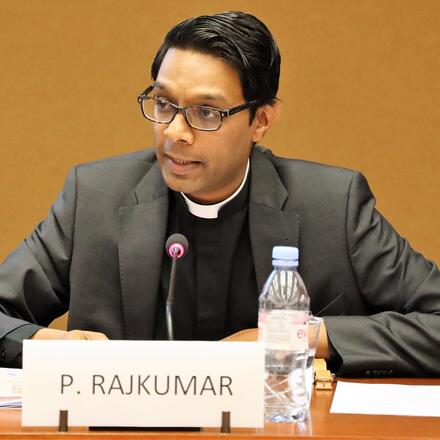 Peniel is Global Theologian with the  USPG and teaches the module on Missional Theology in Global Contexts.

Peniel has a MA in English Literature from Sri Venkateswara University in India and completed his ordination training at the United Theological College (UTC) in Bangalore. While completing his PhD in Applied Theology at the University of Kent at Canterbury, Peniel was ordained in the Diocese of London and served his curacy in a UPA (Urban Priority Area) parish in North London. He returned to India in 2008 to teach at UTC and served as Associate Professor of Christian Social Ethics and Director of Field Education. In 2013 he moved to Geneva to serve as Programme Executive for Interreligious Dialogue and Cooperation with the World Council of Churches in Geneva and subsequently as Adjunct Professor at the WCC's Ecumenical Institute in Bossey, which is affiliated with the University of Geneva.

Peniel's research interests include Dalit Theology, Mission and post-colonial contexts, World Christianity and Interreligious Dialogue. During his time at WCC Peniel initiated the WCC's first Christian-Confucian and Christian-Sikh dialogues and coordinated the publication of Serving a Wounded World in Interreligious Solidarity: A Christian Call to Reflection and Action During COVID-19 and Beyond that was jointly produced by the WCC and the Vatican's Pontifical Council for Interreligious Dialogue.

Alongside many articles Peniel's publications include the monographs Challenges of Transition: Religion and Ethics in Changing Contexts (ISPCK 2007), Dalit Theology and Dalit Liberation: Problems, Paradigms and Possibilities (Ashgate, 2010). He has also edited  Asian Theology on the Way : Christianity, Culture and Context (SPCK 2014, Fortress 2016) and Faith(s) Seeking Justice: Dialogue and Liberation (WCC 2021) and coedited Foundations for Mission (Regnum, 2014), Mission At and From the Margins (Regnum) and Many Yet One? : Multiple Religious Belonging (WCC, 2016).

Peniel is married to Rebecca who is an artist and theologian. They live in Croydon with their sons Ebenezer (14) and Cleon (10).