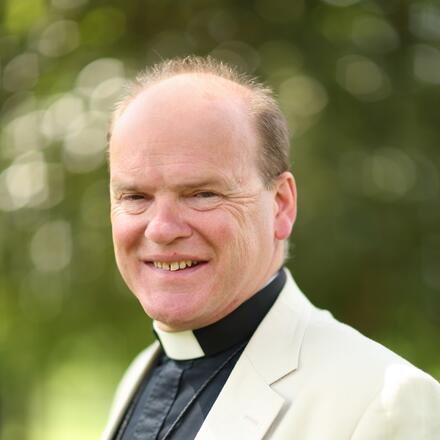 Having read history at Christ Church Oxford, and spent a year in The Sudan shadowing a local Archdeacon, Humphrey came to Ripon College Cuddesdon for three years ordination training in 1983. He then served curacies in commuter suburban Rainham in Kent, and in inner-city Liverpool, at St. Mary’s, Walton. His first incumbency was at Hale in the Guildford Diocese, which he combined with an appointment as Diocesan Ecumenical Adviser. In 1999 he became Team Rector at Tisbury which, by the time he left the post after eight years, served sixteen villages. In this appointment he also served as Rural Dean and as Chair of the diocesan House of Clergy, as well as supervising a number of curates and sharing in the delivery of diocesan IME 4-7.

Humphrey was appointed Bishop of Repton in the diocese of Derby in May 2007. His particular responsibilities in this role focused on areas of ministry: overseeing vocations, sponsoring people for ordination training, and appointments. He chaired the Mission and Pastoral Committee which is responsible for ‘shaping’ the Church locally to fulfil its mission to proclaim the Good News and build the Kingdom. He enjoyed close involvement with schools, both Church and County, and chaired for two years the Diocesan Board of Education; and he particularly relished travelling around the diocese worshipping in all manner of different churches and styles, and seeking to encourage and care for clergy and laypeople.

Bishop Humphrey was appointed Principal of Cuddesdon in April 2015. He draws on his experience as a parish priest and leader at a diocesan level to teach Pastoral Theology at Cuddesdson, and he contributes to the Cuddesdon Gloucester & Hereford and Portsmouth Pathway programmes in the area of Anglican ecclesiology. As Principal he liaises closely with sponsoring bishops and DDOs and takes a lead role in supporting students in their final year in establishing themselves in curacies.

Bishop Humphrey is married to Emma, a district nurse, and has two daughters, Laura and Kate. His interests include being an avid reader and following horse racing.